FujiFilm has recently announced the development of the FujiFilm Z8000. A unique projector which boasts high brightness of 8000 lumens (lm) and a class-leading compact and lightweight design.

The Z8000, to be launched in the beginning of 2021, will join the lineup of the Z Series of ultra-short throw projectors such as the Fujifilm Z5000 equipped with the world's first folded two-axial rotatable lens. 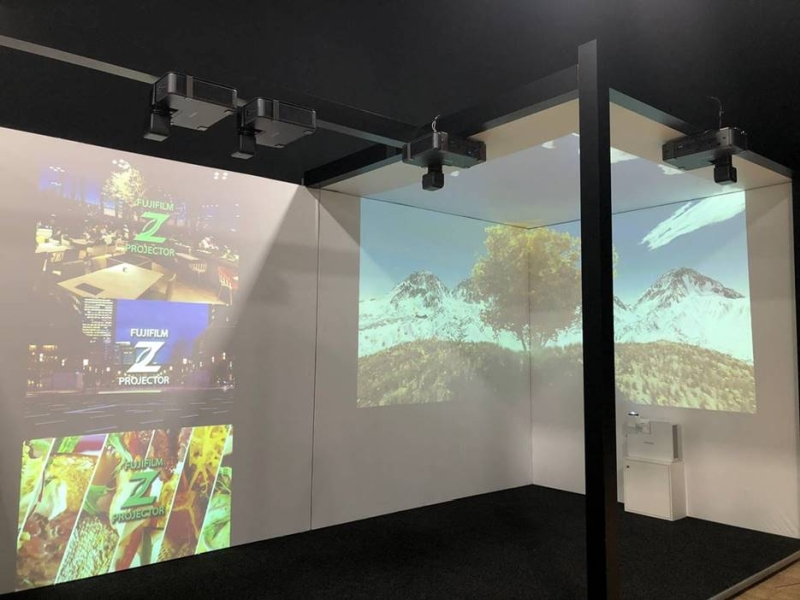 The new FP-Z8000 inherits the main features of the FP-Z5000 while adopting a high-transmittance lens and a laser light source to deliver bright 8000lm images. It can project vivid and high-contrast images even when used for digital signage in brightly-lit stores.

The projector comes in a class-leading compact (W460mm x D510mm x H163mm) and lightweight (weighing approximately 19kg) form factor by the optimum layout of components inside the main body. It can be positioned vertically or horizontally to enable spatial presentation that makes effective use of otherwise wasted space. The geometric correction function, which corrects distortion caused when projecting images on a curved surface, makes it possible to throw powerful images on places where such visual projection could not have been considered.

With the expected launch of the new FP-Z8000 in the beginning of 2021, Fujifilm will expand the lineup of the Z Series, contributing to the creation of diverse spatial presentations at commercial facilities and art galleries or museums.

The FP-Z8000 supports zero-offset projection, eliminating offset that occurs in conventional mirror-system ultra-short throw projectors to allow maximum use of projection surfaces in spatial presentation. Its 1.1x optical zoom capability means the size of projected images can be adjusted without having to move the projector.

The use of a large-diameter aspherical lens element produces the class-leading Lens Shift function of up to 70% vertically and 35% horizontally. The function makes it easy to shift the position of projected images across a wide range without having to change the location of the main unit or direction of the lens. Users can freely create spatial presentation with their inspiration.

The FP-Z8000 has the geometric correction function, which corrects distortion caused when projecting images on a curved surface, enabling spatial presentation on curved walls.

Images projected by multiple FP-Z8000 units can be stitched together in the Edge Blending function to produce dynamic images on a massive screen.

The projector offers interfaces including HDMI that supports 4K signal input as well as DisplayPortTM and 3G-SDI to accommodate the development of diverse systems.